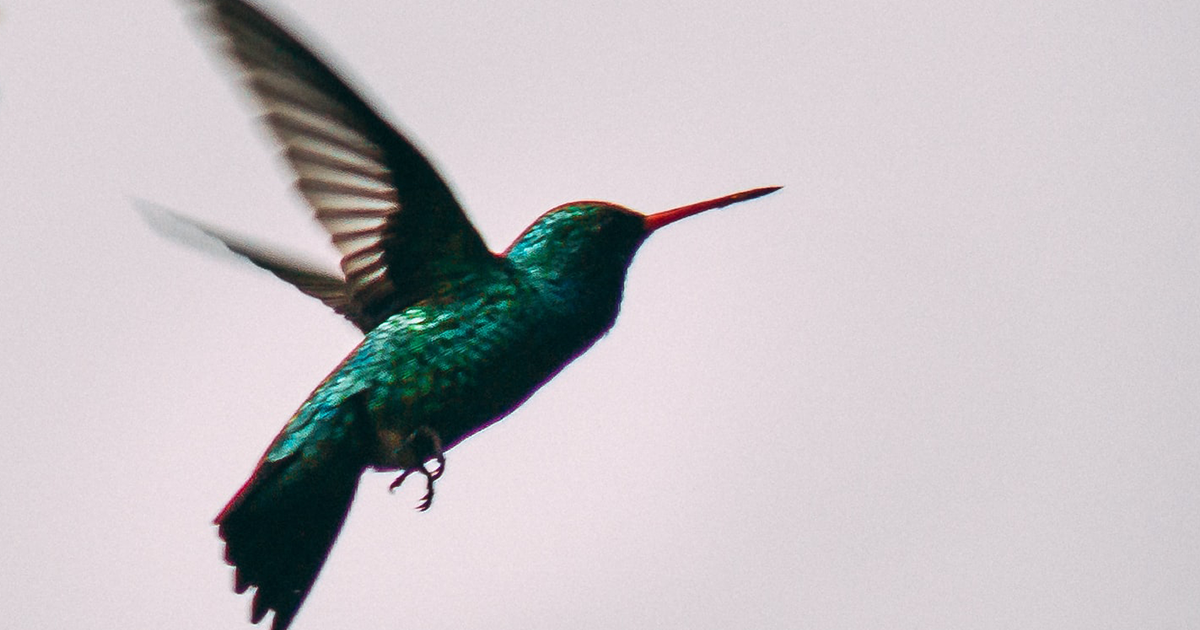 If you were asked to name the fiercest animal in the animal kingdom, how would you respond? Would your initial reaction be to say it would be a bear, a lion, or a tiger? How about a snake or crocodile?

Notice I used the word, “fiercest,” and not words like intimidating, scary or deadly. One of the definitions of fierce is, “intense in activity or feeling, vigorous or ardent.” I used this term because I think the most amazing and intense and vigorous animal is the hummingbird.

Wait, a tiny little bird that weighs about seven ounces and is usually three to five inches in length? Yes, those little birds that arrive each spring and depart in the fall but add color and beauty to our summers. These little flying dive bombers just zip past us without regard to our size.

The tiny little hummingbird got its name because of the sound it makes while flying. They hover in the air and beat their tiny little wings up to eighty times PER SECOND. Those wings are very powerful, as hummingbirds have been measured flying up to 34 miles per hour!

Fun fact, when the males are courting the females, they try to attract them by dive bombing the object of their attention from heights as high as 100 feet at speeds up to 51 miles per hour. That is truly remarkable and probably impresses those lady birds immensely.

So, they can fly fast and high and know how to dive bomb, but why are they the fiercest animal in the kingdom? It’s because they give the name “snowbird” a new meaning. Here in Wisconsin, we typically spot the first hummingbirds around Mother’s Day, in May.

Where did they come from and why did they decide to spend their summer with us?

Most hummingbirds spend their winters in Mexico and South America. They prefer the coasts of the Gulf of Mexico and return there each year in late summer. Then, when spring is imminent, they make the long journey north, as far as the Yukon or southern Alaska. Yes, that is a journey of nearly 4,000 miles by such a tiny little creature.

They follow the Pacific flyway and coordinate their trip with the emergence of tree leaves and the availability of insects along the way. They can fly 500 miles nonstop across the Gulf of Mexico (both ways). It is not true that they hitch rides on the backs of other birds, they do this by their own power.

Since hummingbirds depend on eating nectar, they couldn’t survive a winter where the snow covers the ground, or the plants freeze in the colder months. A few hummingbirds do reside in Florida and Southern California, but most take a journey that is brutal for a tiny, winged animal.

Remember I said hummingbirds are fierce? They are one of the most aggressive birds around. They will attack crows, jays and even hawks that invade their territory. They claim ownership of a backyard feeder and chase intruders away.

Have you ever heard someone use the term, “they eat like a bird?” Well, usually they are referring to someone who doesn't eat a great deal, but when referencing hummingbirds, they actually need to consume half of its weight in sugar every day. Yes, half its weight! If we did that we would not be “eating like a bird.”

Personally, I think hummingbirds are the strongest, fiercest animal in our kingdom. They remind me of the women who drive tractor trailers today. They are focused on getting to their destination and for the most part, are unstoppable. They are on a mission!

The next time you see a hummingbird, think about the journey it has been on and how the tiny creature beats incredible odds to traverse the country twice a year.

For me, I will always consider hummingbirds to be the fiercest in the kingdom!