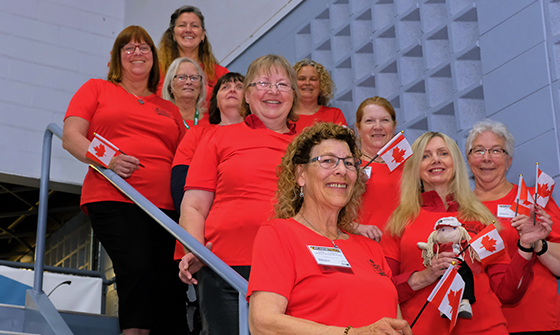 2019 Canadian Salute to Women Behind the Wheel Highlights

Women In Trucking held its fifth Canadian Salute to Women Behind the Wheel on June 8 at the Atlantic Truck Show in Moncton, New Brunswick. The 10 drivers present in Moncton this year join a group of more than 130 professional woman drivers in Canada who have donned the iconic red T-shirts for the group photo that caps off each Salute event.

WIT’s first Salute to Women Behind the Wheel took place in 2009 at the Mid-America Trucking Show in Louisville, Kentucky. Each year since then, Salute events have attracted hundreds of women, including a handful of Canadians. Hosting Salutes in Canada creates an opportunity for more Canadian women to participate in the events, which are organized to honor women who have chosen driving as a career and to recognize their service.

The first Canadian Salute to Women Behind the Wheel took place at Truck World 2016 in Toronto, drawing more than 40 drivers. Additional events took place in Moncton in 2017, as well as Toronto and Abbottsford, BC in 2018.

The Moncton Salute to Women Behind the Wheel was hosted by the Owner-Operator's Business Association of Canada (OBAC), Trucking Human Resources Sector Council Atlantic (THRSC Atlantic) and the Atlantic Provinces Trucking Association (APTA), in partnership with Women in Trucking (WIT).

Maryse Doucet, Director of Planning at Midland Transport and a member of the APTA Board of Directors welcomed the drivers, saying she has immense respect for drivers and what they do.

“It's not an easy job,” she noted. “You are an inspiration, not only to me, but to all women and girls looking to pursue careers in non-traditional roles. I want to thank you for your contribution to trucking and for encouraging other women to consider careers as drivers and other opportunities in this industry."

Peter Macgillivray, President & CEO of Nova Truck Centres and a member of the Board of Directors of THRSC Atlantic brought greetings on behalf of the Sector Council. “It’s a small group with a big impact,” said Macgillivray, “particularly with its women in trucking initiatives.” Macgillivray was referring to the Council’s Advancing Women in Trucking initiative which is helping break down barriers to employment and advancement of women in the industry, and is developing strategies to support industry efforts to increase the number of women considering careers in trucking.

There were three women present this year from the WIT Canadian Image Team, Jo-Anne Phillips of Irishtown, NB, Susie De Ridder of Fredericton, NB and Treana Moniz of Kitchener, Ontario. Image Team members give a public face to WIT’s mission, which is to encourage the employment of women in the trucking industry, promote their accomplishments, and minimize the obstacles they face.

“Women have so much to bring to trucking and transportation industries, just like we do in any relationship,” said Phillips, speaking on behalf of the Image Team. “Men wouldn't get a lot done at home without us,” she quipped. “Our sons, our brothers, our husbands, our fathers, they all need us. We're a good balance. The trucking industry needs more females to get involved. It's a great industry to work in and to grow in, and getting more women involved will certainly add to that balance.”

The 10 women drivers present this year represented a combined 225 years of driving experience, including one new driver with less than year on the job, and another with more than 40 years behind the wheel. The driving careers of several other participants spanned 30 years or more.

“These women bust the myth that a women driving a truck is a relatively new phenomenon,” said Joanne Ritchie, Executive Director of OBAC. “It also sends a strong message to other girls and women that driving can be a satisfying, stable career choice.”

In a bid to encourage involvement, a Carrier Participation Award was launched this year for the carrier that has the greatest number of women drivers at a Salute event.

“There are hundreds of women drivers working in Atlantic Canada today, but on the day of the Salute they were scattered all over North America doing their jobs,” Ritchie said.

“A supportive carrier can make a huge difference,” said Ritchie. “We hope the award will inspire carriers to encourage their drivers to participate and to adjust schedules to accommodate those who are eager to take part.”

Building on the enthusiasm generated by the event, Canada’s first Pop-Up Salute is being planned for the Convoy for Hope Atlantic, which takes place on August 24, 2019 in Moncton. Salute events will be held in 2020 at Truck World in Toronto and Truxpo in Abbotsford, BC.

“We are truly privileged to have such an exceptional workforce with so many skilled women,” said Doucet. “This is why APTA and THSRC Atlantic believe there is high value in continuing to invest in this great cause and the Advancing Women in Trucking initiative. They really can make a difference.”

Organizers would like to give heartfelt thanks to this year’s Salute sponsors: