Women In Trucking Announces its 2019 September Member of the Month 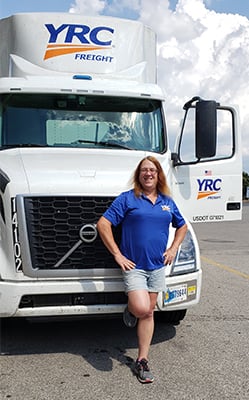 Plover, WI – September 2, 2019 – Women In Trucking (WIT) has announced Regan Morton as its 2019 September Member of the Month. Morton is a professional driver with 13 years of experience. She has been a line haul driver for YRC Freight for the past four years.

Regan Shane Morton is a transgender woman. She started out in life as Shane Regan Morton, a son to parents Sam and Shirley Morton. In 2017, she came out as transgender. A year later, she changed her name and gender.

Morton grew up in the trucking industry. Her dad drove for over 50 years. “When I was a child, he would take us kids with him, let us flash the lights and talk on the CB radio. Out of the four of the kids he raised, I was the one that wanted to go the most! I was driving his truck before I even had a driver's license. I knew then what I wanted to be,” said Morton.

After high school, her troubled youth caught up with her. She spent a year in jail. Once she got out, she was discharged from the National Guard. “I had to start life from the bottom of the barrel,” she said.

With nothing to lose, Morton decided to go after her dream. She contacted a local trucking company, only to learn she needed to be 23 years old and have two years of experience. So, she spent her younger years working as a volunteer and part-time firefighter.

“I had to show my community that I was a good person. After five years, the court overturned my conviction and expunged my records. They gave me a second chance in life. I went on doing contract work and running my own business for 10 years,” Morton explained.

By the age of 36,she could no longer ignore the call of the road. She attended driving school and went to work for a trucking company. She spent the next nine years driving and learning what she liked best. Knowing that she had an interest in LTL and Teamsters,she met with a YRC recruiter at the Mid-America Trucking Show. “That was the beginning of my dream job,” she remembers.

“In 2017, I sought out professional help and went on hormone replacement therapy. What I was doing couldn't be hidden from my employer, so I knew I had to tell my boss,” Morton explained. “At that time, I thought my job and career was over. As I grew into the new person I was going to be, I knew that the company would have to grow with me. Fortunately, I was blessed with probably the best boss I could have had. She did everything she could for me. As I grew as a person, she worked with the company and human resources to make YRC more inclusive.”

In March 2019, Morton joined WIT. “I joined Women In Trucking to support other transgender people and hopefully get more LGBTQ people into the trucking industry. Then, I found myself joining the gender diversity task force,” she said.

The gender diversity task force was recently formed by WIT to better understand the needs of the LGBTQ community. WIT realizes there is a growing number of lesbian, gay, bisexual, transgender and queer professional drivers and other transportation workers. As the voice of gender diversity, the association wants to ensure they are inclusive and to create an awareness within the trucking industry.

“We call ourselves the voice of gender diversity, and we’re stepping up to ensure we represent ALL of our members by including the LGBTQ community in our efforts to attract and retain both drivers and management in this traditionally male-dominated industry,” said Ellen Voie, WIT president and CEO.