Sharing the Road with Semi-Trucks 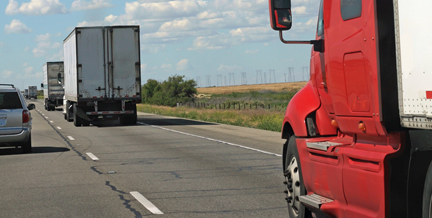 According to statistics, 79% of all accidents involving semi-trucks are caused by car drivers. Few, if any states, require car drivers to learn during license testing about sharing the road with semi-trucks. This is an area that patently needs addressing. Who better to do so than a truck driver.

What is a semi-truck? A semi-truck is an articulated combined vehicle consisting of a pull or tow unit called a tractor and a trailer. Commonly called eighteen wheelers, not all semi-trucks have eighteen wheels; some have more, some less. Common trailers are a variety of types of enclosed vans or reefers (refrigerated trailers), open deck or flatbeds, tankers and livestock haulers. Most semi-trucks are 60-70 foot in length. Fully loaded, they can weigh 80,000 pounds total weight unless permitted for heavier loads. It takes roughly the distance of a football field to stop a fully loaded semi-truck. Semi-trucks not only have to follow state traffic laws, but also have to follow Federal regulations on commercial vehicles and drivers.

One of the disadvantages cars have is that the side mirrors on the front doors show objects further away than they really are. They really do. Check it in your own driveway. Most side mirrors even have it printed on them. Therefore, when passing and re-entering a lane, a driver may think they are plenty of distance away from a vehicle being passed when they actually are not. This is one of the daily challenges truckers have to deal with in interacting with cars. This endangers not only the trucker, but traffic to the sides and rear of the truck. Cutting off a semi-truck for any reason causes the trucker to have to brake suddenly, which can cause them to lose control. A rule truckers use to not cut off others is to not move over until the driver can see the highway under the bumper of the vehicle being passed.

Many people in these times of high fuel prices like to tailgate semi-trucks to supposedly save fuel. While it might save a bit of fuel, it puts the tailgating vehicle at high risk of several dangerous things. If a truck has to stop suddenly, a tailgater does not have time to avoid or slow down and may go up under the trailer, many accidents involving semi-trucks are just these types of wrecks. Semi-truck tires are carrying 110 psi (pounds per square inch) of air in them. If one or more blows out, the rubber and other debris often is thrown behind the trailer at a high speed. This can kill a tailgating driver, other front seat passengers, and do extreme damage to the tailgating vehicle. Also, the concussion from a blowing out tire can even blow out too near of a vehicle’s windows. One should maintain a 4-5 second following distance on dry road; increase that to 8-10 seconds in inclement weather.

Vehicle manufacturers design vehicles with certain devices to alert other drivers to the vehicle’s planned actions. Turn signals should always be used if one is wanting to change lanes or make a turn. If possible, turn signals should be turned on approximately one quarter of a mile from an exit, and fifty feet from a turn. Flashers should be used when having to stop, other than at a stop sign or railroad crossing, on the roadway. Also, they should be used if running under the minimum set speed limit on the highway or if traffic has come to a stop due to an accident or traffic stoppage if one is the rear vehicle in line to alert others that you are stopped. Some states have laws against using the flashers unless broken down. In this case, one can tap one’s brakes repeatedly to alert others to the stoppage or major slow down. Letting other vehicles, especially trucks, know what is going on gives them time to react safely.

Truckers just want to do their jobs and return home safely to their homes and loved ones … just like you do. Working together, we can all get to our destinations safely.