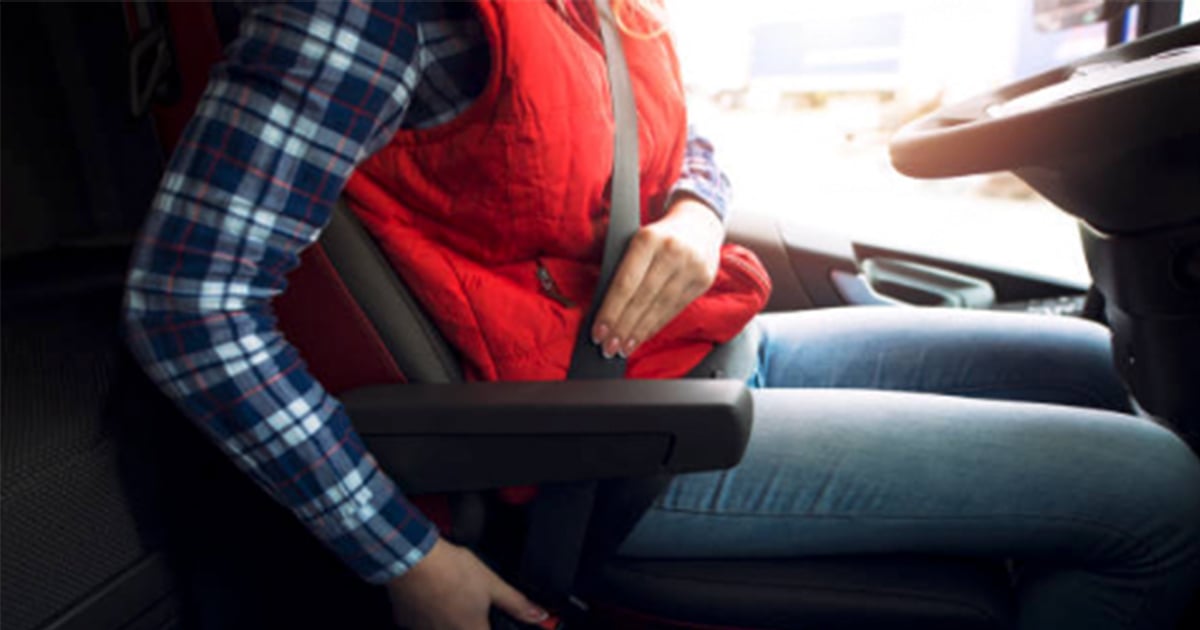 Many women who enter trucking experience culture shock after they get on the road for the first time after school. Preconceived notions about trucking shatter as they realize the reality of the job and find that their lives change in many ways. Some adapt, some do not and quit before they get really started.

On a personal level, folk are creatures of habit. They are used to showering and eating on a schedule and having private, not public facilities, to use. Probably one of the hardest things for a woman to get used to is the lack of privacy in bathroom use or having to deal with bodily functions on the truck. Unless one is showering, the facilities are public for the most part. Many warehouses and factories do not offer bathrooms for women if at all, or their bathrooms are unisex. Then, of course, there are those times when one needs facilities and there is no place to park a truck.

I worked for some people and the son was getting married. His fiancée overheard me talking to the mother about how I dealt with the above issues. The fiancée got very indignant and said that the son would always find her a clean restroom to use and I was nasty. After they married and she went on the truck with him for awhile, she happened to answer the phone on check call. She apologized and thanked me for the information I had shared. She found out quickly that some times one has to do what one has to do.

Showering is another area that folks have a hard time adapting. Showers are unisex, both genders use private shower rooms at truck stops. Some women have issues taking a shower in a room that a male has used, even though the showers are cleaned between users. Then there is finding time to shower. The Hours of Service (HOS) allow time for this, but one has to plan to fit one in, or to take one’s break at a truck stop that has showers. Some times a daily shower just cannot be fit in. This is a deal breaker for some who cannot adapt to just washing up at these times and taking a shower the next day.

If someone is rigid in their eating schedule, having to eat due to habit and upbringing at specific times, this can create problems in adapting to the trucking lifestyle. Truckers are not on set schedules every day. However, it can be adapted by carrying their own food on the truck, but it takes time to get set up to do this.

Some truckers think that trucking is a job and not a lifestyle. However, becoming a truck driver changes people’s lives in many ways. Not being home every night unless one is lucky enough to find a local job, not being home for family events, and getting used to both tiny house living and a new language variation can throw many off of their stride. Knowing of the changes required in one’s life and adapting to them can make or break a new truck driver. Change is never easy, but with patience, a willingness to learn and accept, and some time, change occurs.

Truckers have to adjust to working different times; there are few regular shifts in trucking. For instance, truckers can work fourteen hours a day, driving eleven. Today, one might work from five in the morning to seven at night. Tomorrow, they may start work at ten in the morning due to a delivery appointment and be done for the day at midnight, then start the next day at ten in the morning. This fluctuating work shift can disturb ingrained sleep patterns. Adjusting to being able to sleep at different times can be difficult to achieve.

The fluctuating work patterns include days when one sits still, no freight, breakdown, or too long to deliver. A driver may or may not be paid for these times. If they are paid, it is usually a smaller portion of their usual pay for breakdown and layovers. These nonworking days not only throws off sleep patterns, but also eating patterns.

Most truckers sleep at truck stops or rest areas. These places have constant traffic in and out, and people moving around. Add the noise of brakes setting, refrigeration units running, and trucks starting and stopping, the noise levels can be intense. For people just starting out as drivers, getting a quiet night’s sleep is almost impossible. Adjusting to being able to tune out the ambient noises can take time and cause frustration and fatigue.

Most truckers work seven days a week until they are out of hours, not to a set pattern. This week one might drive several hours some days, some days eleven hours, but drive everyday. Next week, the person might drive six days eleven hours a day, then sit for thirty four hours and start again. There is no telling usually, unless on a dedicated run, what days one will be working week to week. This constant change can create issues for people who are used to working five or six same days a week. Learning to go with the flow is difficult for some.

With technology, today’s truckers are supervised more than in previous years. However, it is not by a person standing face to face. Most communication between drivers and supervisors are through texting on a satellite system. This is difficult for many to adapt as much is lost in utilizing just the written word. Also, a driver has to make decisions with or without a supervisor’s assistance. Communication skills by texting is hard for some to both do and to interpret. This can lead to misunderstandings on both sides.

Understanding the changes one will have to adjust to when entering trucking will help one to be able to adjust quickly to the aspects of the job that one is not used to. Not being able to adapt will cause added stress and dissatisfaction about the job. One needs to take their time and remember, trucking is not a nine to five job.

Many women enter trucking at a later age than men. Some are coming into the industry after leaving abusive relationships, some are leaving minor children behind, and a few are dealing with low self-esteem. Many have never been away from the support of family and friends.

Women who leave abusive relationships and enter trucking bring a lot of baggage with them at times. Fear of being abused or taken advantage of, fear of men or even other women, and perhaps being disrespected for years, may cause adjusting to the life of a trucker difficult.

Not understanding how communication between office and driver is done, the above type of women can misunderstand how a dispatcher may communicate with them. Since most of the communication between driver and dispatcher is texting these days, the stark wording of an instruction from dispatch can come across as harsh and perceived as abusive, even though it is not meant to be. This leads the woman to think she is in a hostile work situation and she may over react due to past abuse.

Fear of peers or other drivers of both genders brought on from having been in abusive relationships and low self-esteem makes learning the job very difficult due to the fear of asking for help. Women with overwhelming fear of others struggles in doing the job which reinforces her low-self esteem and thoughts that she cannot do the job adequately. This can lead the woman to job jump or leave the industry before she even gets started. Women who have been in abusive relationships and who have low self-esteem need to be open in their communications with the office and take extra time to think before reacting. Seeking professional help may be necessary.

Women with minor children are coming into the industry like never before. These women look to trucking to be able to support their children in a better fashion than they can in low paying jobs available at home. However, leaving their children at home leads to feelings of guilt and concerns about their children’s well-being while she is gone. This can lead to distraction while driving and misunderstandings with dispatch especially about getting home time. It can take time for these women to find a balance between responsibilities at home and the job, communication with the children, the children’s caretakers and with the office, communication has to be kept open from the start.

Adapting to the isolation of trucking can be difficult for some women. Loneliness, not having face to face conversations with others, and learning to eat alone can cause depression in some women who were used to constant contact with family and friends. While there are cell phones, emails, and texting, it is not what most are used to. This can be adapted to with time. But after being a trucker for awhile, some women find that they have little in common to talk about with family and friends. Truckers become immersed into the lifestyle and interests of trucking.

Time is the key to adapting to the lifestyle of trucking and understanding that changes in one’s life does occur when entering trucking. Accepting the changes, finding ways of keeping some interests alive, and celebrating one’s new life and opportunities as a trucker may not be easy, but worth it in the end as one finds success as a trucker.