The Pros and Cons of Pets on the Road 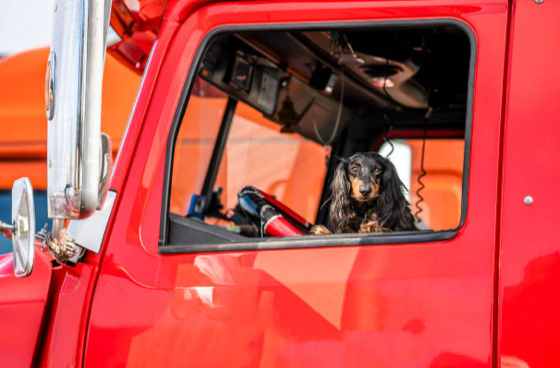 Sit back in any truck stop or rest area and you may see a vast array of pets, from birds to snakes, brought out of trucks for a bit of fresh air. The most common are dogs and cats, though I have seen some exotic pets on the road.

There are many benefits to having a pet on the road. They relieve stress and loneliness, get the driver out of the truck into the fresh air, and can provide security. I had a cat on the truck at one time who would nip me on the hand if someone came near the truck while I was sleeping, so even they are protection at times. My late little dog Lillian Russell was with me for 12 years and racked up over a million miles. Now if I was out of the truck, and anyone came near, she would raise some serious sand. However, if I was sleeping, she too would sleep hard depending on me to wake up if there was a problem, only then would she raise sand.

There are drawbacks to having a furry pet on the truck. Shed hair gets into everything and will clog up AC filters if inside the cab. Dogs, cats, and birds can cause seen and unseen damage to the truck itself. At my last company, who had a no deposit pet policy, there was a driver who had a duck on the truck, yes, a duck! He carried a plastic tub that he would put water in when he had time and allow the duck to swim in it. That duck was well trained to follow the driver anywhere, and the driver let him do so often.

Two problems, while the driver made accommodations in the truck for the duck, the duck was not potty trained, so left a trail where ever he went, and the driver would take the duck into customers to show him off. That caused some issues for sure! The other problem did not arise until the driver moved to another company in the winter time. The boss had his truck detailed and assigned it to another driver. When the weather warmed up, the new-to-the-truck driver started to itch. The boss called in an exterminator to see what was the problem. It was bird mites and the truck had to be fumigated. No more ducks are allowed at that company.

Being on the road with a pet takes more responsibility, observation, and control than having a pet at home with a fenced yard. One has to scope out any area before walking the pet for any contamination on the ground or obstacles to the pet and the driver’s health. Many of these things are found in the grass at the back of truck stop lots, sadly. Used drug paraphernalia for instance, used prophylactics, body fluids and matter, and spoiled food to name a few things. Then there are the bad things for pets that nature provides, nettles, stickers, burrs and thistles, fleas and ticks, not to mention fire ants in the south and snakes all over in tall grass. One of the worse things that can be easily overlooked is antifreeze that has been dripped or leaked on the ground. Antifreeze is deadly to animals, even a lick of it off of their paws can kill them.

Some folks do not think and will walk their animals where they should never be walked. Two of the worst places I have seen this done is on the fuel islands on the concrete, and the other was at a grocery warehouse where the woman took her dog under the trailer while at the dock and allowed it to do its business, and no, she did not clean up after it. It is no wonder that some facilities will not allow pets on the property.

I would not give up the years that I had Black Cat or Lillian Russell with me on the road for anything. To be honest though, chasing Black Cat all over a truck stop when she would jump out of the truck, only to find her sitting on the step of my truck waiting on me, was annoying. Furthermore, with Lillian, having to get out of my nice warm truck in  minus 60 degree wind chills to allow her to do her business was not fun either, or in the pouring rain, or blistering heat. However, the unconditional love and their silly antics made my job easier for the most part and my life fuller.

Only you can decide what type of pet you want to have. I hear hedge hogs are becoming popular. However, think of the pros and cons of having a pet on the road, make sure your company allows them, and be a responsible pet owner. They are worth the trouble.